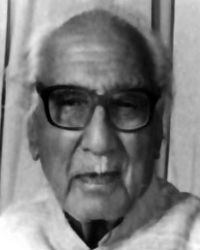 Born in May, 1898, Shri Vichitra Narain Sharma left his college studies in 1920 in response to the call given by Mahatma Gandhi. He was then in the B.A. class at the Banaras University.

Inspired by Mahatma Gandhi’s call for non-cooperation with the British Government, and under the leadership of Acharya Kripalani, a group of 25 students led by Vichitrabhai left their place and laid the foundation of the Shri Gandhi Ashram. Vichitrabhai was the leader of these students. Shri Lal Bahadur Shastri, Shri Kamalapati Tripathi, Shri T.N. Singh were amongst the members of this group. Acharya Kripalani was their founder President.

In 1958 the Prayog Samiti was founded at Ahmedabad and all the major Khadi Institutions had to contribute for its formation. Vichitrabhai, however, said that unless this was approved by Acharya Kripalani, he could not take any decision. In 1921 when the Prince of Wales visited India, Vichitrabhai joined a campaign of protest and went to jail. This earned praise from Mahatma Gandhi.

Even in the jail, Vichitrabhai had to undergo confrontation with the jail staff who behaved in an arbitrary and dictatorial manner. Vichitrabhai, who was always of a genial disposition and was pleasantness personified in his behaviour, was a difficult prisoner as far as the jailors were concerned.

Vichitrabhai was never fond of power. But under the compulsion from his mentors he entered the U.P. legislature in 1952, 1957 and 1962. He was a Minister in all the cabinets from that of G.B. Pant to that of Dr. Sampoornanand. After Dr. Sampoornanand’s resignation in 1960 he became a minister in Shri C.B. Gupta’s cabinet. Even during his Ministership, Vichitrabhai continued to work for the Gandhi Ashram -and seek his livelihood from it. The salary and allowances as a Minister were handed over to the Gandhi Ashram. He was extremely austere in his personal behaviour and, as far as possible, did not employ the services of the security staff and other servants.

He was persuaded to accept the Chairmanship of the Khadi Commission, but he refused. Later on, however, he had to accept under pressure, the Chairmanship of the Certification Committee of the Khadi Commission and in order to suit his convenience, the office of the Certification Committee was shifted to Lucknow.

Shri Vichitrabhai is always relaxed. There is no sign of a strain or tension in him. He led a happy life and has been totally self reliant including washing and mending his own clothes. Even when he had to confront labour unions, he respected them and treated them extremely well, as a result of which they realised their responsibilities and the confrontation was avoided. Shri Gandhi Ashram which was started in 1920 is a monument of Vichitrabhai’s tireless endeavour and patience. In order to propagate Khadi and create a desire of wearing Khadi among common people, he had to undertake numerous tours and had to put in strenuous efforts. When ultimately Khadi became an article of consumption among the workers and the common people, Gandhiji himself expressed his deep appreciation.

Vichitrabhai was a leading figure of the Non-cooperation movement started by Gandhiji in 1921. He underwent imprisonment several times during the freedom struggle. In 1959, under the leadership of Vinoba Bhave, the Gandhi Ashram workers, along with their leader, Vichitrabhai, joined the Bhoodan Movement. He participated in the Bhoodan and Gramdan Padayatra in U.P. and elsewhere. He was one of the strongest pillars of the constructive movement started by Gandhiji and of which men like Acharya Kripalani and Lal Sahadur Shastri were stalwarts.

Vichitrabhai is a Founder Chairman of Banwasi Seva Ashram. He had a special love for the Ashram work. He was a strong pillar. Whenever some conceptual discussion arose, he had the patience to listen to everybody and then in very few sentences he could relieve the confusion and found a guiding principle. Before his demise, when Dr Ragini visited him, he said to her:

He received the Jamnalal Bajaj Award for Constructive Work in 1993. He was a Karmayogi, disciplined intellectually and emotionally, completely detached, affectionate to his colleagues and workers, a votary of truth and objective expression, a shining symbol of the moral values which were practiced every moment by Gandhiji and which he did everything in his power to propagate as the only means for achieving the independence and progress of the nation.