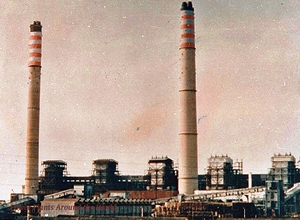 A view of Singrauli Super Thermal Power Station. Thanks to presence of such a large number of power station and other factors, environmental pollution is increasing with every passing day

Environmental pollution control has emerged as a recent issue. Five super thermal power plants function in the region: one at Obra in Chopan block, the other four around Pant Sagar reservoir in Myorpur block. Additionally, Hindalco and Kanodia industries have small thermal power plants in their own industry complex. Coal mines are located near the Pant Sagar. Besides, a large number of small industrial units exist in the area. Dala, close to Obra, has stone crushers and a cement plant. Because of production and transportation, environmental pollution is increasing with every passing day.

Because of burning of coal, the percentage of mercury has increased in the atmosphere and pollutes water, plants and air. Chlorine, fluorine, sulphur dioxide and nitrogen oxide, etc., also add to pollution, whose effect is visible not only on people residing in the vicinity of industrial townships, but also on water, soil and crops, fruits and vegetables.

The effect of pollution is most profound on the western and eastern sides of Pant Sagar reservoir. The crusher area too suffers from heavy pollution. The Government sometimes stops and then re-starts the crushers. The villagers and road users suffer. Crops are not being raised in the area.

In December 1996, the Ashram organised a workshop in which representative of industries gave information about their process for generating production, pollutants and their controls. People also shared their experiences as to how their crops and bodies were severely affected. Immediately after this, the Ashram carried out a survey on the effects of pollution on crop production. This led to awareness among the common people. Questions were raised on environmental pollution and these questions compelled the industries to improve pollution control.

For monitoring environmental pollution, the Ashram started water and air quality monitoring with the help of two Ph D students under the guidance of Dr GD Agarwal. In January 1999, it established a small laboratory in its campus. The findings are shared with the society, district administration, Central Pollution Control Board and industries. An attempt is underway to mount a continued pressure for environmental pollution control on industries and the government.

Since January 2002, the Ashram conducts environment pollution monitoring for the Central Pollution Control Board.