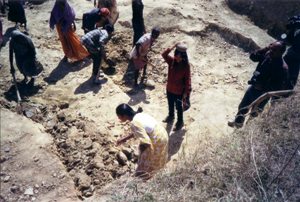 Villagers digging up earth  for a water storage structure 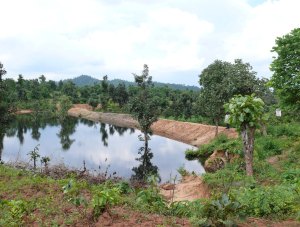 The Ashram has laid special focus on farming since its inception. From 1969 to 1975, land improvement and bunding were taken up on a mass scale, under the project ‘Food for Work’. The project benefited 800 farmers, as their 1,200 acres of land had improved by constructing 30 community bunds and 350 small individual bunds. This led to the availability of water with which paddy cultivation in low lying areas could be done. Another benefit of this project was that people got work during difficult days. This enabled the people to come out of the clutches of moneylenders and, as a result, exploitation was reduced. In the famine of 1979-80, the Ashram undertook bunding and well digging for providing relief to the locals. The Ashram also motivated the government to undertake this work on a mass scale and helped the government in preparing earthen dam designs.

Dry land development was a problem and a solution was found to it in 1967. Trenches were dug to store rain water on slopes. So far 269 acres of land, belonging to 210 farmers, that could not be irrigated and were infertile, were developed the new way. This was successful and cheap also. Hundreds of farmers did this, without taking any help from the Ashram. Most of the people started farming on this land, while some planted saplings. It is hoped that more people will adopt this technique.