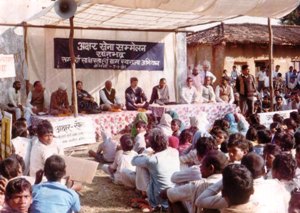 Representatives of Gram Swaraj Sangathan at the Akshar Sena Sammelan A view of training of Sangathan representatives

Sonbhadra district is a hilly region and the settlements are dispersed. It is not possible for everyone to gather at a revenue village or at panchayat level. That is why a separate Gram Swaraj Sabha is formed for these dispersed settlements. Till March 2003, 431 Gram Swaraj Sabha’s were formed in 230 revenue villages of 134 gram panchayats in the work area. These Sabha’s are associated with the 13 Village Development Centres of Banwasi Seva Ashram.

Gram Swaraj Sangathan has played an important role in the long struggle for land entitlement, and contributed a lot in the clearance of the 50,000 cases related to land rights which were pending in the Lok Adalats. It also deals with corruption cases, liquor drinking menace, atrocities on women, harassment and family disputes. Its recent involvement is in assuring filing of claims of all deserving forest dwelling persons under the provision of the Forest Rights Act of 2006.

Representation of women in Gram Swaraj Sabha’s is being promoted. There are 10 women presidents and 5 women secretaries.

An annual experience sharing and planning for future programmes workshop is organised at Gram Nirman Kendra’s and a conference takes place at the central level on Prembhai Memorial day.